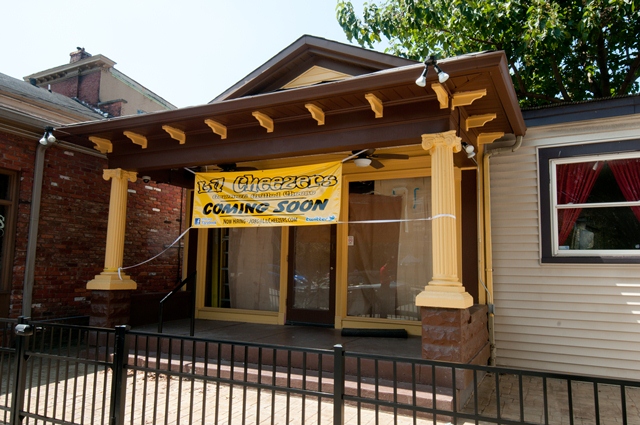 So how does everybody feel about the Lil Cheezers Food Truck getting their own permanent restaurant space?  I think more power to them. Grilled cheese is a staple food in almost every child’s life, the crunchy, hot, buttery bread, with the ooey gooey cheesy center. My mouth is watering just thinking about it. And everyone has an opinion on which way is the correct way to cut a grilled cheese. Is it in triangles or rectangles? I say without a  doubt a grilled cheese has to be in triangles. Whatever your opinion or preference, we can all agree that grilled cheese is delicious and that Lil Cheezers is taking them to a whole new level.

This Friday will mark the last Pop Up Friday of the hip NuLu East Market District. Every Friday of July, the retailers and restaurants of the NuLu neighborhood offer special late night hours, discounted items, and refreshments. From 7:00pm to 9:00pm there will be free live outdoor entertainment to add to the festivities. The event is family friendly and is sure to provide excellent food, top notch shopping, and an exciting ambiance that is uniquely Louisville.

Louisville’s Downtown has recently undergone major development and with the revitalization of many downtown neighborhoods, the growth of Louisville’s Downtown has never looked brighter. Louisville is the largest central business district in the state of Kentucky and with the recent opening of the KFC Yum Center in Central Downtown, the community is booming from the center outwards.

Louisville’s Downtown is made up of five districts; East...

Celebrate the Olympics in Louisville

The Summer Olympic Games are kicking off tonight in London with what is promising to be an exciting opening ceremony. There are many who think that London will struggle to match the spectacular opening ceremony of the 2008 Summer Games in Beijing, whose large scale choreographed drummers stole the show. London officials, are making clear that they have many secrets up their sleeves for their opening ceremony and that it wont disappoint.

My own household is getting filled with American flags, and red, white and blue decorations, in preparations for our Olympic party tonight. Everyone coming has to wear their country’s colors and be ready to indulge in backyard Olympic games. You can feel the Olympic buzz in the air as more and more people are getting into the Olympic spirit. The Olympics bring seventeen days of pure competitive fun, where no matter what...

Run for The West End School

Normally at 7pm on a weekday night, I would be hanging out on my front porch, drinking a glass of wine and watching my two year old son run around with the neighborhood children. There is usually a group of about five or six of them throwing water balloons or selling lemonade out of their homemade stand. Tonight however, thanks to my gracious neighbor who is in tip top shape, I am considering running in my first ever 5k. Crazy I know, considering the heat index is going to be hitting the upper 90’s at the kickoff to the race, but I can’t resist helping a noble cause.

Nothing Beats a Summer Drive through Oldham County

One of the things I love best about Louisville is the diversity within the city itself. Within ten minutes from sitting on my front porch in the Highlands, I can be skipping rocks on the riverfront, admiring the graceful horses galloping on some of Kentucky’s most beautiful farmland, or enjoying a night out sipping a cocktail in one of the newest hip restaurants.  Summertime in Louisville is a time when the city in all its forms comes alive and I love to take it all in.

One of my favorite things to do in the Summer in Louisville is to drive out to Prospect and Oldham County and take in my surroundings. I usually start with a drive down Rose Island Road. My two-year-old likes to call Rose Island the “Fun Road.” We love to drive down the windy street, point out the various animals in the Henry’s Ark Petting Zoo, and wave to owners as they ride their horses. The most exciting part of Rose Island Road though, are all the “wee...

Before Buying Louisville Real Estate It Pays To Do Your Homework

For most of us, our home is our biggest investment, and the mortgage we secure to purchase it is the biggest debt we’ll ever undertake. The benefits of home ownership are many, but those who come to the loan closing table ill-prepared will lose out in the end. It definitely pays to do your homework when purchasing Louisville real estate. Here are a few things you can do to make sure you are ready when it’s time to sign on the dotted line.

Preapproval – Be sure to have your mortgage lender preapprove you for a home loan before you being your search for properties. Not only will this take the stress off of you later on, but sellers will find the offers of those who are already preapproved far better than those who aren’t. Unlike many parts of the load process, preapproval is relatively quick and painless and can often be done over the phone, so there’s no excuse for not being prepared.

Mortgage Type – It pays to spend...

Picnic Time is Upon Us

The Catholic Church Summer picnic season is underway, leading to many sugar filled nights, dizzy-ride induced screams, and gambling excitement.  I mean, where else can you go to drink a few cold beers, let your kids run around and get messy, and let the whole family eat delicious junk food without feeling guilty?  Because all the proceeds go to a good cause, you can eat, drink, and be merry, without anything weighing you down or holding you back. The St. Anges Carnival  has been entertaining folks and serving the community for 15 years and  is the largest of the Catholic Picnics in the Louisville area. The festivities begin this week and provide something for everyone.

Wednesday, July 18th marks the beginning of the carnival’s week long celebration.  Decorated cars and floats will drive up and down Bardstown Road in the Highlands to remind everyone of the impending carnival.  Cars will start driving at 6pm and will begin...

The Dudes, “Achievers“, Walters, and Maudes, are once again invading Louisville. The 11th annual Lebowski Fest kicks off this weekend, Friday July 20th and Saturday July 21st.   Lebowski Fest is a two-day event that celebrates the 1998 Cohen Brothers film The Big Lebowski, starring Oscar winner Jeff Bridges as the dude himself.

Lebowski Fest was sparked in the midst of a conversation at a tattoo expo.  The founders of Lebowski Fest, Scott and Will, were quoting movie lines from the Big Lebowski while at the expo in their hometown of Louisville.  When other people started to chime in, quoting the lines they too thought hilarious after hearing 100 times, they had a revelation.   Scott and Will thought that if people would show up to a convention about tattoos that they would surely come to an event celebrating the Big Lebowski! They decided to explore this further, and set up a time and date at a bowling alley, put out flyers, and waited...

Highlanders have found themselves wrapped up in yet another mystery, the sudden and unforeseen closing of the Avalon restaurant.  Avalon abruptly closed it’s doors last week, posting white paper signs in the windows stating their closure was due to “unforeseen circumstances.” Avalon opened it’s doors in 2002 and was one of the most popular hot spots on Bardstown Road’s Restaurant Row.  Avalon has won numerous award and accolades over it’s ten years of service. Most recently it won Metromix Louisville’s Best Date and Special Occasion Spot, Best of Louisville Award for Best Patio Dining, and was given over ten published reviews and write-ups in the last year. The Lobster Mac and Cheese, signature cocktails, and lively patio were all staples of Avalon that will surely be missed by many.

I walked by the front of the restaurant yesterday, and I peeked inside the large windows to see what shape it was in.  It was rather...

Am I the only one that is missing Starlight Frozen Custard?  With these past couple weeks of triple digit heat, by body has been aching for some good Summer treats and it is yearning for one of my forgotten favorites.  Starlight was around before we were bombarded with do-it-yourself “fro-yo” spots, that have become the hip new thing, but couldn’t make it after the new trend took over. The abandoned Starlight sign is still standing at the corner of Shelbyville and Hubbards Lane teasing my taste buds every time I drive by.  Although I don’t feel like anything can replace my beloved frozen custard, I have to admit, these frozen yogurt stores are slowly starting to win me over.

I visited my fist do-it-yourself frozen yogurt store while visiting my brother in California several years ago.  I thought it was a cool idea, I liked the fact that I was in charge of my dessert, but thought it was for the California health freaks who...